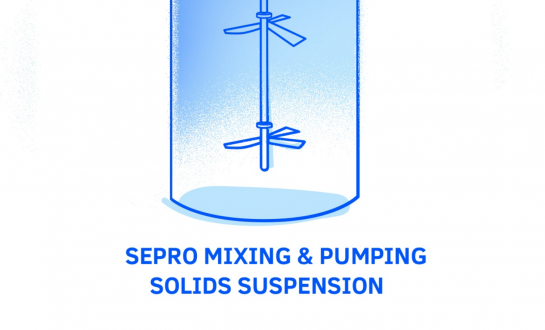 When using agitators, the science of mixing and agitation must account for many variables, and when dealing with a mixture containing solid particles, there are many things that can go wrong. Insufficient flow, incorrect mixer design, and solids buildup are all problems that can hamstring an operation. Francois Van der Merwe, General Manager of Sepro Mixing and Pumping, walks through the fundamentals of solids suspension, the causes of solids buildup, and how to prevent it.

What do we mean by “solids suspension”?

With any mixture containing solid particles that do not dissolve into solution, the aim is to suspend the particles in the mixture within the tank and prevent a solid, unmixed buildup at the bottom of the tank. The agitator mixer must produce enough flow to overcome the settling velocity of the particles. This suspension of particles can be categorized as “on-bottom”, “off-bottom”, or “full suspension.”

On-Bottom Suspension: Just enough flow within the tank to prevent progressive solids buildup at the bottom of the tank with particles not moving higher in the tank mixture.

Off-Bottom Suspension: A liquid flow velocity that results in particles generally moving between the bottom of the tank and the agitator impeller but not mixing into the top levels of the tank.

Full Suspension or Uniform Suspension: Due to a high flow rate, particles are suspended all the way to the top of the tank. Full uniformity is approximately 95% of the volume of the mixture because the flow pattern of the very top layer of the mixture changes from vertical to horizontal, so particles may not suspend in this uppermost layer.

Understanding the level of suspension required for an application is important because the power requirements for full suspension can be up to 25 times higher than the power required for on-bottom suspension. In some cases, a second impeller may be required to achieve full suspension, which can increase both capital and operational costs. As an example, bottom discharge tanks feeding into a filter must have a consistent percent of solids in the flow going out the bottom of the tank; this does not require full uniform suspension, so costs can be reduced by fully understanding the application.

Preventing solids buildup and getting the solid particles suspended in the mixture is important for applications such as buffer tanks, feed tanks that have varying solid levels, or in leaching applications where uniform suspension is required throughout the entire volume of the tank.

Causes of Buildup and Detection

Solids buildup is a constant problem for most applications involving solid-liquid mixtures. There can be several factors that cause buildup – changing process conditions and incorrect impeller design are the most common. When agitator impellers are too small and are running too fast, the pumping volume may look correct for producing the flow necessary to suspend solids, however, the small impeller does not reach the sides of the tank where the volume of flow is needed to suspend the solids.

Without being able to see into tanks, buildup can develop and become an issue. One method of measuring buildup is to use a weighted ball with spikes on it, lowering it along the side of the baffle. The spikes allow the ball to dig into any solid buildup rather than rolling off the “fillet” of material. By measuring the difference between the height of the tank versus the depth the ball reaches, buildup level can be measured.

Another method of detecting buildup is by draining the tank, but this can cause significant downtime in an operation. Thermal imaging is an easier method and particularly effective in climates in which the slurry temperature and ambient temperature are different; solids buildup will show up as cooler sections within the tank.If your application is dealing with issues of buildup, feel free to contact our industrial mixing experts for help!