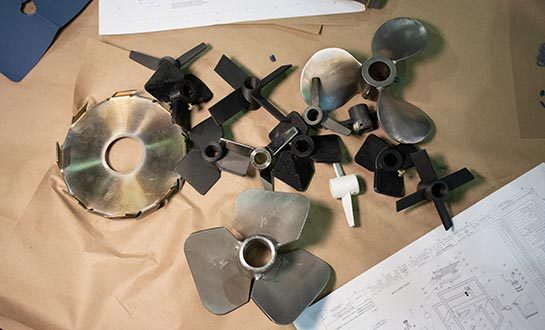 Sepro Mixing & Pumping designs and manufactures industrial agitators, mixers, and peristaltic pumps. With our knowledge of fluid dynamics and understanding of our clients’ objectives, we can deliver exceptional results. If you’re new to the world of mixing and pumping, we’ve put together a helpful guide for the fundamentals of mixing. If you have any questions about the basics, or how an advanced industrial agitator can help your project, contact Sepro Mixing & Pumping.

Mixer: A device consisting of at least one impeller mounted to a shaft and connected to a drive mechanism.

Impeller: Any device mounted to a rotating shaft and used to circulate fluids, solids and/or gasses in a mixing vessel.

Mixing systems can be classified into several types:

Static mixers continuously mix fluids without moving components. As fluids flow inside a tube, they pass by baffles which create turbulence, mixing the components together.

A mixing system where the motor is underneath the mixing tank and the shaft enters it through the bottom. Often used for high viscosity applications in cosmetic, pharmaceutical and food industries.

A mixing system where the motor is beside the mixing tank and the shaft enters it through the side. Often used in large petrochemical tanks.

A mixing system where the motor is above the mixing tank and the shaft enters through the top. Top-entry mixers are the most common arrangement for industrial mixing; however, much of this information can be applied to other mixing arrangements as well.

Contains the materials for mixing. Tanks can be constructed from a variety of materials such as specialty metals or plastics to best suit the mixing application. Tank linings or coatings are often an economic choice for reactive fluids or gasses. Tanks may be open at the top or sealed depending on process requirements.

Supports the motor, gearbox, shaft and impeller above the mixing tank.

Flat metal plates attached to the wall of the mixing tank, used to prevent swirling and vortexing in the tank. Mixing tanks will usually have three or four baffles.

The solids that collect in the bottom corners of a cylindrical tank. Sometimes a design element is added intentionally in order to prevent deposition of solids in the corners of large tanks.

Provides the power for the mixing system.

Selected to provide the optimal rotational speed of the impeller at the required torque for the mixing application.

Connects the drive to the agitator shaft to transmit the required torque.

system to the impeller.

The constant level of liquid in the tank used for design purposes.

The lowest liquid level in the tank which still requires effective agitation.

Looking For A Custom Mixing Solution? Contact Sepro Mixing & Pumping to have a industrial agitator, top, side, or bottom entry mixer designed for your specific application.