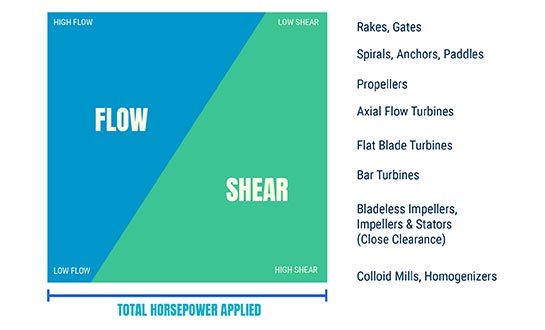 An Introduction to Shear and Flow

What Are Shear and Flow?

Flow: Strictly speaking, flow refers to the mass of a liquid which passes a point per unit of time. In mixing, flow typically refers to the primary flow created directly by the agitator impeller. This can be measured in the discharge area of the impeller.

Typical applications requiring high shear are the production of paints and cosmetics, where it is necessary to disperse powders in a carrier fluid. A high shear agitator impeller can create the required dispersion, but requires extremely high power to distribute the powder and fluid evenly throughout the tank.

The addition of a second, low shear impeller provides the bulk flow necessary to achieve proper distribution throughout the tank  with significantly lower power.

Alternatively, the mixing of flocculant (polyelectrolyte) requires minimal shear to avoid breaking up the long-chain molecules, which help to produce the coagulation. Slow moving, low shear aerofoils are preferable (bear in mind the requirement for mixing). Higher speeds can be used, but only intermittently.

Whether you generate more flow or more shear depends on the agitator impeller design. The correct choice of impeller can result in significant power savings and operational costs. It can also impact both motor and gearbox requirements in your mixing system. For example, a small, high-speed impeller could create sufficient flow, but with unnecessary turbulence and at a much higher power consumption than a larger, low-speed agitator impeller.

Contact Sepro Mixing to Save Energy and OPEX Costs

Every mixing application will require some combination of flow and shear. Specific applications may require one high flow and one high shear impeller to get it right. To learn more about shear and flow, or to save operational costs on your mixing system, contact Sepro Mixing.