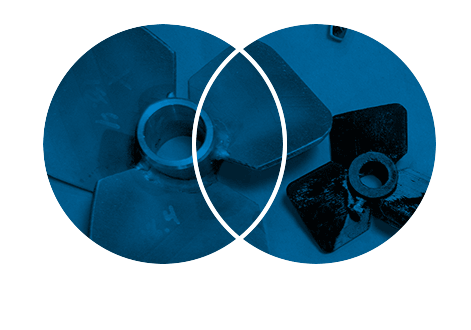 It’s inevitable to run into challenges with agitator mixers onsite and when that happens, it’s good to be prepared. Part of our job is to empower clients to troubleshoot, so they get the most out of their operation.

Here’s an example of what to do when you’re dealing with agitator mixer issues in a gold leach circuit:

The operation of a large gold mine in North America was experiencing problems with its cyanide leaching circuit.

A cyanide leaching circuit usually consists of large agitated tanks for mixing mineral slurry with cyanide in order to extract gold. Typically, the slurry consists of 30-40% solids by weight with the solid particles being less than 100 microns (0.1mm) in size. Air or oxygen is often bubbled through the slurry to improve the leaching reaction.

In this case there were 12 leach tanks that were 9m in diameter and 13m in height.

As a result, costs increased due to equipment failure and revenue was reduced due to mechanical downtime and process inefficiency.

There were some common causes while others were unique:

Despite the significance of these problems and the large negative impact they had on the leaching process, we found the root causes easy to address and solutions straight forward:

a. A correctly designed, larger diameter impeller will increase the zone of agitation and increase the flow velocity around the bottom, and the walls of the leaching tanks.

b. This will recover the full active volume of the tank, which will increase slurry residence times and improve overall leach recovery.

c. Furthermore, a larger impeller can run slower and will prevent the harmonic movement of the shafts, eliminating the shaft bending and breaking that was observed.

a. This will prevent impeller flooding and the improved agitation from Solution 1.a. will result in proper gas retention in the slurry.

b. The reaction rate will increase, and will improve overall leach recovery.

3. Decommission one upcomer in order to increase line velocity in the remaining upcomer to reduce launder sanding.

4. Replace the gearboxes so preventative maintenance can be performed on-schedule, and unplanned downtime is eliminated.

Are you experiencing any of these problems in your leach tanks? Contact the agitator mixer experts at Sepro Mixing and Pumping today for quick and effective solutions.